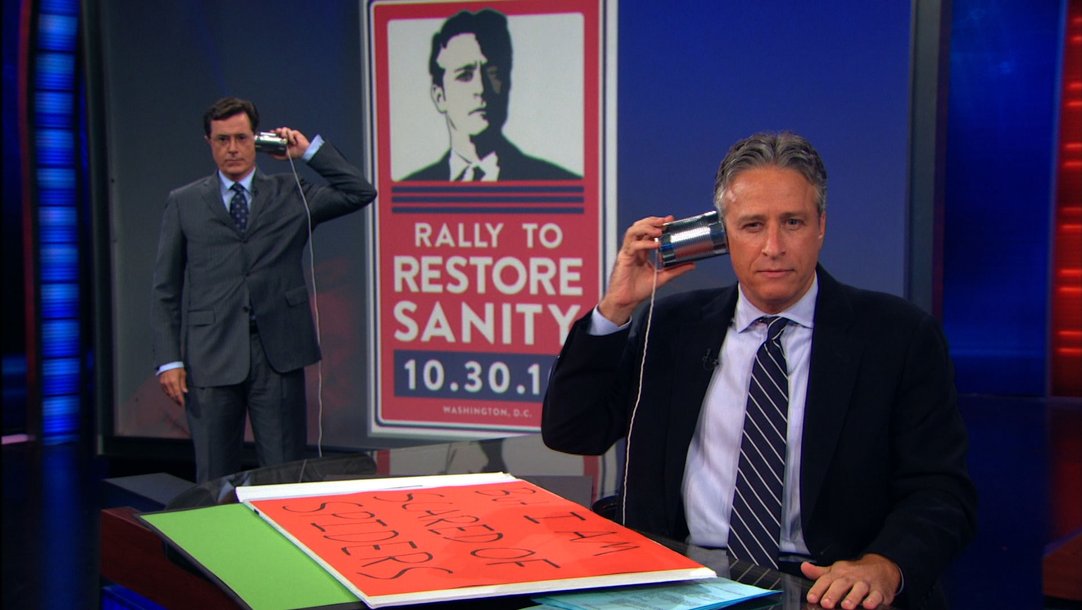 “I can’t control what people think this was. I can only tell you my intentions. This was not a rally to ridicule people of faith or people of activism or to look down our noses at the heartland or passionate argument or to suggest that times are not difficult and that we have nothing to fear. They are and we do. But we live now in hard times, not end times. And we can have animus and not be enemies.

But unfortunately one of our main tools in delineating the two broke. The country’s 24 hour political pundit perpetual panic conflictinator did not cause our problems but its existence makes solving them that much harder. The press can hold its magnifying up to our problems bringing them into focus, illuminating issues heretofore unseen or they can use that magnifying glass to light ants on fire and then perhaps host a week of shows on the sudden, unexpected dangerous flaming ant epidemic.

If we amplify everything we hear nothing. There are terrorists and racists and Stalinists and theocrats but those are titles that must be earned. You must have the resume. Not being able to distinguish between real racists and Tea Partiers or real bigots and Juan Williams and Rick Sanchez is an insult, not only to those people but to the racists themselves who have put in the exhausting effort it takes to hate–just as the inability to distinguish terrorists from Muslims makes us less safe not more. The press is our immune system. If we overreact to everything we actually get sicker–and perhaps eczema.

And yet, with that being said, I feel good—strangely, calmly good. Because the image of Americans that is reflected back to us by our political and media process is false. It is us through a fun house mirror, and not the good kind that makes you look slim in the waist and maybe taller, but the kind where you have a giant forehead and an ass shaped like a month old pumpkin and one eyeball.

So, why would we work together? Why would you reach across the aisle to a pumpkin assed forehead eyeball monster? If the picture of us were true, of course, our inability to solve problems would actually be quite sane and reasonable. Why would you work with Marxists actively subverting our Constitution or racists and homophobes who see no one’s humanity but their own? We hear every damn day about how fragile our country is—on the brink of catastrophe—torn by polarizing hate and how it’s a shame that we can’t work together to get things done, but the truth is we do. We work together to get things done every damn day!

The only place we don’t is here or on cable TV. But Americans don’t live here or on cable TV. Where we live our values and principles form the foundations that sustains us while we get things done, not the barriers that prevent us from getting things done. Most Americans don’t live their lives solely as Democrats, Republicans, liberals or conservatives. Americans live their lives more as people that are just a little bit late for something they have to do—often something that they do not want to do—but they do it–impossible things every day that are only made possible by the little reasonable compromises that we all make.

Look on the screen. This is where we are. This is who we are. (points to the Jumbotron screen which show traffic merging into a tunnel). These cars—that’s a schoolteacher who probably thinks his taxes are too high. He’s going to work. There’s another car-a woman with two small kids who can’t really think about anything else right now. There’s another car, swinging, I don’t even know if you can see it—the lady’s in the NRA and she loves Oprah. There’s another car—an investment banker, gay, also likes Oprah. Another car’s a Latino carpenter. Another car a fundamentalist vacuum salesman. Atheist obstetrician. Mormon Jay-Z fan. But this is us. Every one of the cars that you see is filled with individuals of strong belief and principles they hold dear—often principles and beliefs in direct opposition to their fellow travelers.

And sure, at some point there will be a selfish jerk who zips up the shoulder and cuts in at the last minute, but that individual is rare and he is scorned and not hired as an analyst.

Because we know instinctively as a people that if we are to get through the darkness and back into the light we have to work together. And the truth is, there will always be darkness. And sometimes the light at the end of the tunnel isn’t the promised land. Sometimes it’s just New Jersey. But we do it anyway, together.

If you want to know why I’m here and want I want from you, I can only assure you this: you have already given it to me. Your presence was what I wanted.

Sanity will always be and has always been in the eye of the beholder. To see you here today and the kind of people that you are has restored mine. Thank you.